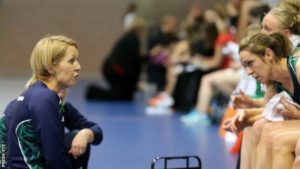 Elaine Rice, the four time Head Coach at Netball NI is stepping away from the role following the completion of her contract.

Rice’s results across her four tenures at the helm have seen Northern Ireland rise steadily through the ranks to positions that raised the profile of the Warriors immensely and resulted in higher expectations year on year. With a total of 63 caps as Head Coach, (including 2 Commonwealth Games, 1 World Cup, 1 Nations Cup and multiple matches in many countries and tournaments around the world), Rice has developed an expectation of our Netball family, to support our Warriors at major competitions. 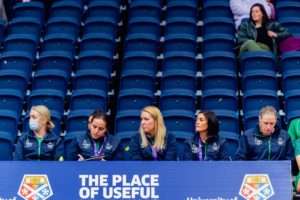 World Cup Qualifiers in October were always going to be a challenge and with a competition place not secured for 2023, the most successful Head Coach in Netball NI history is going to focus on supporting the organisation build our sport in Northern Ireland positively through her work in her club, her university and as a parent.

‘It has been a great honour to come back into the Netball NI workforce and lead the Warriors for this last 18 months, playing in 3 major competitions; Europeans, Commonwealth Games and World Cup Qualifiers. I’m proud that across this time I’ve been able to deliver on key actions:

I am a passionate supporter of netball, The NI Warriors and developing our sport in NI and I’ll always be willing to support the organisation however I can going forward but I feel now is the right time to have a new face in the Head Coach role.’ Elaine Rice 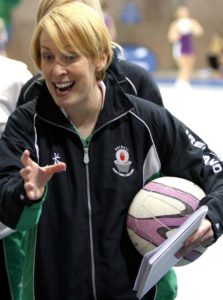 ‘Elaine has dedicated so much of her life to netball in Northern Ireland and to Netball NI.  I will always be grateful for her willingness to step up and put herself out there in this key role. What she has achieved with the various squads over the years is a testament to the time and diligence she commits to the role. I know she’ll not be a stranger. Her support with our coaching programmes alongside the growth and performance within her own club are further evidence of her passion for our sport and I’m glad she’s part of our Netball NI family.’ Karen Rollo, Netball NI Executive Manager

Netball NI are progressing with an independent performance review and the Warriors programme, after a period of downtime is back up and running. Recruitment for a performance lead/head coach will commence in due course.

We know all our Warriors supporters wish Elaine some well earned rest and will see her around the courts.