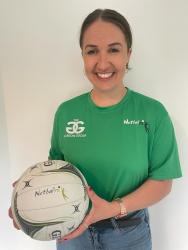 Emma will be joining us on a part time basis as we aim to develop the increasing prominence of netball in Northern Ireland for our Warriors, international performance pathways and our ever-growing membership base.

Speaking of her appointment earlier this week Emma said:

‘The growing status of Netball as displayed by multiple NI players being selected in Vitality Superleague Netball squads over the past few seasons and, also Northern Ireland’s Top 8 finish at the last Commonwealth games, are all examples of how netball is growing for not just the national identity on the world stage, but for clubs too.  These are some reasons that Netball NI has caught my eye in the last few years or so and why I want to be part of this exciting phase of such a forward-looking organisation.  I can’t wait to get started!’

Emma has extensive experience in the media industry, with over 10 years working as an Assistant Producer for The European Golf Tour, acquiring and perfecting a wide range of production skills in a variety of situations in multiples countries across the globe.

Her recent work has also taken her to the pitches of the Northern Ireland Football League and BBC Sport NI Online.

Securing funding for this position from the National Lottery Community Fund via the Dormant Accounts programme was a huge boost to our business growth plans. We know the impact having a professional in this role will make and are excited that Emma with her experience, knowledge, creativity and passion for our sport has joined our team. Emma has a clear understanding of the communications and digital needs of the business, her vision and skill for content creation alongside her ability to build relationships promises an exciting step for Netball NI.

Emma commenced her post on 5th July and we know our members and wider netball family will welcome her and wish her well.