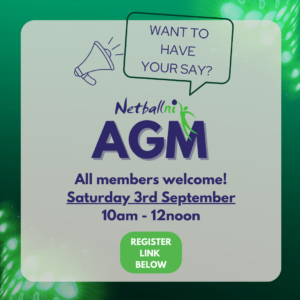 Notice of the annual general meeting of Netball Northern Ireland

The Affiliated Organisation must give written notice to NNI of the name/s of representatives. This should done by registering online here no later than   5pm on Wednesday 31st August 2022

At the meeting, members will have the opportunity to:

At the meeting, members will be asked to vote to:

In order to adhere to the proposed timetable, the NNI Board kindly request that aside from points of clarity, members wishing to table any agenda items or motions please do so in writing to the Executive Manager not later than 5pm on Friday 26th August 2022.

Items or questions raised on the morning that have not been received by the Executive Manager by the deadline or items that fall outside of the business of the AGM may not be dealt with at the meeting but may be responded to in a more appropriate setting.

All motions or agenda items must be sent care of the Netball Office address or Executive Manager email address. Any motion should also be supported by 2 other individual members who are each eligible to vote at the AGM.

All affiliated clubs must send a minimum of 1 representative to the AGM. Any club failing to meet this requirement will be fined £25 and will not be allowed to affiliate until the fine has been paid.

All Clubs, Schools or Bodies of NNI who are not in default of membership fees due to NNI or affiliation fees, are eligible to vote at the AGM. Affiliated Clubs members hold 3 votes and an Affiliated Schools other Body member will hold 1 vote. Every Affiliated Organisation representative must be a member of NNI and aged 18 years or over on the 1st day of January in the current year to be eligible to vote on their behalf.

The Affiliated Organisation must give written notice to NNI of the name/s of representatives. This should done by registering online here no later than   5pm on Wednesday 31st August 2022

All individual members who are not in default of fees are eligible to attend and speak but are not allowed to vote unless they are representing a club, school or affiliated body.