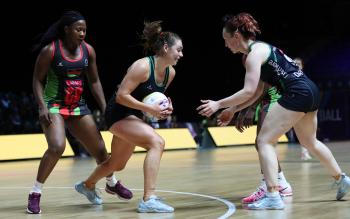 NI Netball Warriors head coach Elaine Rice has named a mixture of experience and youth for the Commonwealth Games in Birmingham.

There are seven players in the 12-woman squad who will make their Commonwealth Games debut in Birmingham this July, but Head Coach Elaine Rice has a range of talent and experience at her disposal at the 2 week long multi sports event showpiece. The Warriors will be in action on the opening night of competition when they face defending world champions New Zealand at the NEC in Birmingham.

“To select 12 from 28 was really difficult, we have a brilliant bunch of U21’s coming through so to select the squad was challenging,” commented Rice. “Some of the squad may be new to the Commonwealth Games but the likes of Olivia McDonald and Jenna Bowman have had a number of caps but weren’t about four years ago.” Rice also mentioned Ciara Crosbie, who has been to a World Cup, and Emma Magee, currently playing for NSL side Surrey Storm, can all bring a range of experience to the group; as well as the four younger players coming through in each area of the court.

“The Super League players have four more years’ experience this time, for example four years ago Michelle Magee hadn’t played Super League but now she has a lot of court time there.”
“Michelle is the ultimate professional, she works hard for the team so the experience she can bring despite being only 22 is brilliant.”

As well as defending world champions New Zealand, the Warriors are in the same group as defending champions and hosts England, Malawi, Uganda and Trinidad and Tobago.

“We became Warriors because we fight to the death, our group is really difficult which seems to happen at the Commonwealth’s you get a strong group and a less strong one.”

“The African Nations are really coming good, and World Netball are working hard to promote the game in Africa.”

“We have to meet Malawi, Uganda and Trinidad and Tobago they are nations that have all held a top 10 spot and are well worth it.”

“Malawi and Uganda haven’t been out of the top eight for a while so it is the hardest group you could get along with the world and Commonwealth champions.”

The Warriors warm up for Birmingham with action on the court this weekend at Jordanstown.

“This is an opportunity for the girls that don’t play Super League and even the ones that do to come together and play as Netball NI.”

“We had sent the word out to a couple of men’s teams in England and they came back and said they wanted to play.”

“We can a play a tournament over two days and we are putting out two teams so all the Commonwealth girls can get maximum preparation.”

Find out more information about the Warriors Challenge Tournament here