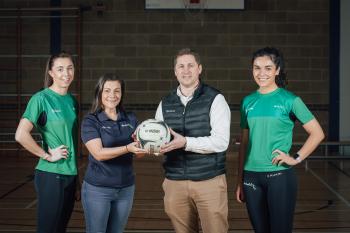 Netball NI, have renewed our partnership with leading sportswear company, Kukri Sports, synonymous with NI sport, the three year deal will see the two of us working even more closely together.

Kukri Sports will be the official kit partner of Netball NI providing quality, professional, durable kit to our regional and international squads.

As well as supporting the Northern Ireland squads, there will be exclusive offers to Netball NI clubs and an online shop for bespoke Warrior fanwear.

It’s an exciting time for netball in Northern Ireland as our domestic competition returns to courts across the country from 24th January following almost two years being side-lined with Covid restrictions and we cannot wait to see our clubs back in action. We also have five players from the Warriors squad being picked by teams across the Vitality Netball Superleague for the 2022 season and fans eager to watch them complete alongside and against the world’s best before we hope to see our full squad in action at the Birmingham Commonwealth Games followed by the European Region World Cup Qualifiers in October, this is going to be an incredible year.

“I am absolutely thrilled to renew our partnership with Kukri Sports. Not only are they a huge support of sport in Northern Ireland, their garments are excellent quality and most importantly our athletes are comfortable and feel good in their kit, giving us great feedback on everything from playing dresses to leisurewear.’

‘We are delighted to soon be launching our bespoke fanwear shop and are looking forward to seeing our netball family proudly wearing their Netball NI merchandise both on court and when supporting our Warriors.’

“This partnership will see benefits not only for Netball NI and Kukri Sports, but for our member clubs, schools and participants as well.”

“We are proud of the partnership between Kukri Sports and Netball Northern Ireland and we are delighted to announce this extension.

From grassroots to the international stage we are committed to support the teamwear needs of all competitors and we are excited for the next 3 years of the partnership.

We look forward to supporting all of the underage teams and particularly the NI Warriors as they strive to reach the 2022 Commonwealth Games and World Cup in 2023.”