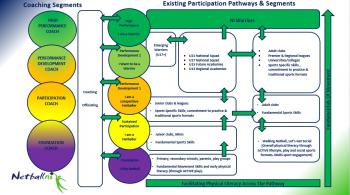 Netball NI have identified the need for a new coaching framework to improve netball coaching within Northern Ireland, ultimately to raise participation numbers and achieve higher performance levels.   The framework will address the importance of ‘good coaching’ across Netball NI’s Participation Pathways and Segments, with learning content tailored to the segment population, moving away from the existing ‘one size fits all’ approach.

The first stage in the development of the new coaching framework was to understand our participants: their age/stage of development, their context and motivations to take part in netball.  This led to the creation of a diagram to show the existing participation pathways and segments in Northern Ireland and then defining the coaching segments where coaches operate.

The new coaching framework will:

The development of the new coaching framework was led by Netball NI's Head of Workforce over a twelve month process.  Consultation was held with a range of coaching and coach education experts from Sport Northern Ireland, the School of Sport at Ulster University and Steve McQuaid who previously worked as Head of Coaching at UK Coaching (formerly sports coach UK).  Just recently, the framework has been discussed with the new Coaches and Officials Working Group, this followed ratification from the Board of Netball NI.