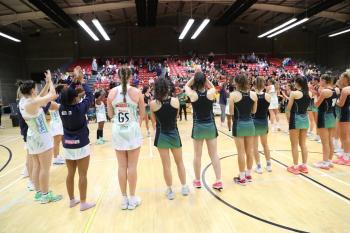 We were delighted to host South Africa Spar Proteas has they competed in a three match series in Lisburn Racquets last weekend.

The Spar Proteas arrived in Belfast on Wednesday 20th October and completed a number of training sessions before taking the court three times in three days against the Scottish Thistles, Wales and an extended 6quarter training match versus our own NI Warriors which allowed Head Coach Elaine Rice to try out lots of new players and combinations.

A clean sweep for the 5th in the World ranked side, they had to work hard on each outing to secure their wins and were thrilled with the support each team received by the NI netball family. Supporters relished the return of this level of international netball to our courts and each match delivered exciting, quality netball for our fans. With many of those on court now turning their attention to Fast 5 it was great to see some household names in action in Lisburn and no doubt many of the players will have gained new supporters from their performances.

Netball NI would like to thank everyone who supported this event to happen, it was a short turnaround from initial discussion to it happening and we couldn't have delivered such a successful event without; Lisburn Racquets Club, South Africa Netball, Netball Scotland, Wales Netball, NI U21's, NI umpires and our staff team. A huge thank you also to our netball family for coming out to support over the three days.