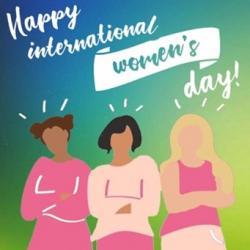 From Netball NI, Happy International Women’s Day to all of our amazing, strong members and to women all around the world!

Here at Northern Ireland Netball, International Women’s Day of course means a lot especially due to netball being a predominately female sport. Here at Netball NI, we support our female netballers, from social clubs, walking clubs, junior netballers to our Warriors. Netball throughout has come on such a success journey with even further to go.

This year has been one to remember, with the Vitality Netball Super League being fully covered Sky Sports on television as well as YouTube. It is also amazing to see so many of our NI Warriors playing in the VNSL!

‘’International Woman’s Day has given me a chance to reflect how through Aurora Walking Netball I have been given the opportunity to continue to play the team sport that I played at school and has provided me with friendship and a sense of belonging that I never envisaged having in my retirement years. Here’s to Woman’s Achievements”.

Some of our local NI clubs took to social media to share their activities on International Women’s Day.

City of Derry Ladies Netball Club, Newcastle Netball Club and Down Netball Club all decided to discuss and share their club profiles. Within this it was great to see all the new people joining committees and clubs.

Down Netball Club reminded us of their ‘Jerusalema’ which they performed and recorded social distanced on New Year’s Day. Below is a link, check it out: