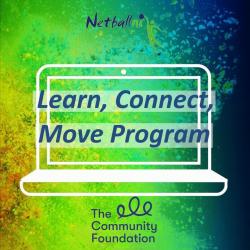 Q. Tell us everything about the Move, Learn Connect, Program:

Lisa: It was a 6-week program which was revised due to covid.

It was all supposed to happen face to face but with covid that was not possible. We had to revise and change the program so it could be delivered all online and which seemed to be a successful move.

The program ran every Tuesday night for 2 hours, 7.30 – 9.30. We managed to get 24 women from throughout Northern Ireland signed up and engaged for the full 6-weeks. To be fair, the full 24 attended for the full duration of the program. Which was great; everyone now knows the struggles of online learning and committing to 6-weeks online is a pretty good achievement.

I think one of the reasons it was successful was because the program was so diverse, and it wasn’t just one thing for 6-weeks; every week had something different – there might’ve been a move element or a learn element within it or a connect – since we were trying to connect that group of women together.

From the program we were able to get 24 newly qualified umpires at introduction level, which is a great achievement. Although they are beginners, it is still that initial step. From this, there has been at least 3 women who went on and have signed up to the level C umpiring course which is great.

Q. What were your highlights of the program?

Lisa: Highlights would definitely be that we had Women’s Aid and they presented where the White Ribbon campaign was mentioned. When  Women’s Aid gave their delivery there was a Q&A at the end, and some of the participants were shocked from some of the figures displayed. It gave everyone that sense of when being out in the community delivering or playing, pointed to look out for so they can try and help somebody in that situation. Making that awareness of this happening and people use netball as a space having her time away from work or whatever her circumstances may be.

We also had a focus on mental health and were fortunate to have a mental health councillor who came on board and delivered a presentation for us.

In our move aspect we had physical activity coaches who came on board ensuring that the participants we not sitting looking at a screen for the full 2 hours meaning that there was at least a short period where we were doing some sort of exercise in that time.

Q. Were there many benefits of being online?

Lisa: One of the benefits of being online is that there was a greater opportunity to have women engaged from all over Northern Ireland. Whereas the initial program was based on specific areas. Being online allowed us to have more women from throughout the country – if we were to deliver this face to face we may be limited with travel constraints on perspective participants which while could reduce the geographical impact, would support a great impact in a specific area – there are definitely benefits to both online and in person delivery.

Q. What were the main aims of the program?

It was about connecting participants and supporting new learning and exposure to netball activities alongside wider opportunities for women and girls during this time when their usual activities may be hampered.

Main aims of the program were to engage groups of women. Our outcome is for when restrictions lift, that those 24 women who have received their intro to coaching and umpiring; that they will go out into their local communities and maybe start up a fresh club or join a club already there, whether is a social club or an affiliated club or after school clubs. It’s all about the knock-on effect, thinking about all of the people which this course will affect and it’s nice that Northern Ireland Netball have been able to do this.

Q. Will the program be happening again?

Lisa: I hope to do it again, definitely. This programme was fully funded by the Community Foundation which allowed Netball NI the opportunity to deliver something so unique, we will seek support again for further delivery programmes and with Learn, Move, Connect  being so successful we are confident we should be able to update it as needed and deliver again.